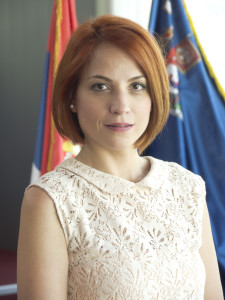 DEPUTY SECRETARY OF THE ASSEMBLY OF THE CITY OF NIŠ

Mrs. Milena Kostić was born on May 15th, 1977. She finished high school “Stevan Sremac” in Niš, and later graduated from the Faculty of Law, the University of Niš, where she obtained her LLB degree.

She was developing her professional career gradually; in the very beginning, i.e. in 2006, she began to work in the Niš City Administration.

From June to August 2020, she served on active duty as Deputy Secretary of the Assembly of the City of Niš.

Mrs. Milena Kostić speaks the English and the Italian language.

She is married and has two daughters.