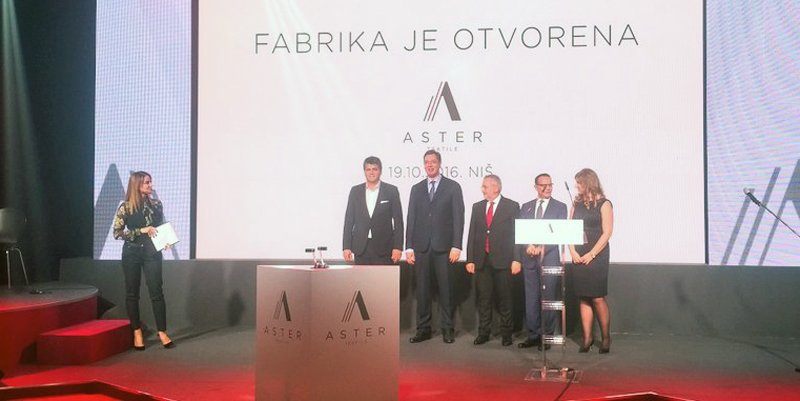 Prime Minister Aleksandar Vucic today officially opened in Nis factory “Aster Textile”, one of the leading Turkish textile companies, and added that Serbia was proud of the Turkish investors. “Aster Textile” has invested €9 million in the construction of the Nis factory, which is equipped with modern machines, and it employs 300 workers. The Prime Minister congratulated the director of the factory “Aster Textile” Ismail Koca on what has been done so far. He also visited the premises of the factory and expressed the hope that in the next two years it would employ 2,000 young citizens of Nis. He also talked with workers and wished them successful work. The opening of the factory was also attended by Deputy Prime Minister and Minister of Trade, Tourism and Telecommunications Rasim Ljajic, Minister of Economy Goran Knezevic, Turkish Ambassador to Serbia Mehmed Kemal Bozay and Nis Mayor Darko Bulatovic. The factory was established in Turkey in 1993 as a company specialising in fashion design and production, whose centers for business development are located in Istanbul, London and Barcelona, and whose manufacturing plants are in Turkey and Bangladesh. The annual turnover of the factory is €100 million, and it has production capacity of more than 2.5 million pieces of fashion items.