By parading through main pedestrian street Nis and with the performance of the ensembles in the amphitheater on the quay, 9th International Students’ Folklore Festival began which would end on July20th with   a big concert on the Summer Stage in Nis Fortress. This year the audience here in Nis will be able to see folk ensembles from six countries, but the biggest attraction of the festival are the participants from San Jose (Costa Rica), who are for the first time in Serbia.
Before a packed amphitheater on the quay the rich folkloric tradition was presented by ensembles from Bulgaria, Hungary, Slovenia, Romania, Costa Rica and Serbia. On the behalf of the City of Nis the guest were welcomed by Jelena Mitrovski, Nis City Council Member.

The Organizer and the founder of the Festival is Students’ Cultural Center Nis and its Folklore Ensemble ORO with the support of the City of Nis.  The festival tries to introduce folklore traditions and diverse national cultures to citizens of Nis and southeast Serbia and to present our large cultural heritage as well.

VISIT BY THE AMBASSADOR OF SLOVAK REPUBLIC

Nis City Mayor Darko Bulatovic together with Nis City Council Member Mrs. Jelena Mitrovski and Assistant Mayor for Economy and Investment Mr. Dragoslav Pavlovic met with the H.E. Mrs. Dagmar Repcekova, the Ambassador of Slovak Republic to Serbia, at the reception hosted at Nis City Hall. The further possibilities of cooperation were discussed during the meeting taking into consideration that from October 31st there would be direct flights from Nis to Bratislava which would bring two cities closer as Mayor Bulatovic said. The new possibilities open up for cooperation between Slovak and Nis businessmen of Nis. On this occasion Ambassador Repcekova expressed her gratitude to all those who helped after a horrific car accident on the highway near Nis, in which five Slovak citizens died.

The new grant program to support innovative research projects in Serbia has been presented today to the businessmen and representatives of the scientific community at the meeting organized at Nis City Hall in cooperation with the Regional Development Agency South and Regional Chamber of Commerce. The participants were welcomed on the behalf of Nis City Mayor by Mr. Dragoslav Pavlovic, Assistant Mayor for Economy and Investments.

The cooperation programme is being implemented by the Innovation Fund and it is funded by the European Union, in the amount of 2.4 million euros, and the Republic of Serbia, in the amount of 1 million euros. It is designed with the technical assistance of the World Bank. The Fund provides grants amounting to 300 000 euros per project, and in the next months, it will be presented in Belgrade, Kragujevac, Cacak, Novi Sad and Novi Pazar.

The application for the funds can be submitted by the consortium of maximum five members consisting of at least one private small, micro and medium-sized enterprise established in Serbia, with annual revenues of at least 200 000 euros, and a public scientific research organization, also registered in Serbia.

Cooperation programme between science and business is one of the pillars on which the Innovation Fund together with its partners base their comprehensive and consistent commitment to strengthen innovation sector as one of the cornerstones of the local economy based on knowledge.

In addition to this program, since March 2016, the Fund has been implemented a pilot program for technology transfer TTF Programme, funded by the EU, with the objective to enable the redirection of public knowledge from academic research organizations to the private sector by linking researchers with businesses. In June 2016 the Innovation Fund signed a cooperation agreement with the University of Nis.

Since 2011, Republic of Serbia Innovation Fund has been actively promoting links between science, technology and economy and contributes to the development of innovative entrepreneurship. The Delegation of the European Union in Serbia has been supporting the work of the Fund since its establishment. The Fund has awarded financial support to more than 50 inventions developed in young and technologically mature domestic private enterprises under the Support to Innovation in Serbia Project financed by EU funds in the amount of 8.4 million euros. EU support will continue through additional funds in the amount of 4.9 million euros for the implementation of the Program of cooperation between science and business, to the work of the Office of Technology Transfer under the Program TTF and to the development of the Strategy of Scientific and Technological Development of Republic of Serbia  for period 2016-2020.

“As the first man of the city I will do everything so that my fellow citizens can live better,” as newly elected Mayor Mr. Darko Bulatovis said during the official taking over of the office. Former Mayor Mr. Zoran Perisic congratulated Bulatovic on new position, noting that the city administration is being handed over in a better condition than it had been in 2012 when he took over the office.

“I am sure that the team, that new Mayor has gathered, will provide full support in achieving his program objectives. The programme that he has presented was really impressive. It shows that my place is being taken over by new man with a very serious intent and with clear goals. I urge the new city councilors to assist in the work of the new Mayor and I wish to him a successful first four-year office term” as the former Mayor Perisic said on this occasion.

“I will do really everything in my power so that no citizen of Nis is ashamed of what I did. I am not ashamed of the past, I want to work with my team to contribute to our citizens being more satisfied and happier, to in the context of local self-government exercise their rights through the work of the local self-government which will be organized differently and where the attitudes of the employees and their behaviour towards the citizens will be different,” said the new Mayor Darko Bulatovic.

The new Nis City Council held its first session chaired by the Nis City Mayor Mr. Darko Bulatović. The session was held due to the decisions that were necessary to be adopted before the session of Nis City Assembly. The first decision by the Council was to appoint Ms. Marina Jankovic as the new Secretary General of the Council. It has not been decided yet whether the members of Nis City Council would be in charge specific areas and projects.” We are going to find the best solution. In any case, the door is open for the public and the media at any time, on issues within our jurisdiction that are of interest to citizens, “as Mayor Bulatovic said. 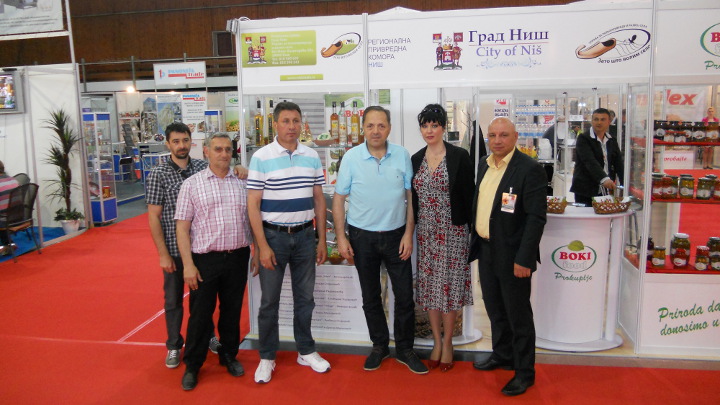 City of Nis Department of Agriculture and Rural Development in partnership with the Regional Chamber of Commerce participated at Agricultural Fair in Novi Sad. The farmers from this region presented their products at the joint stand. The International Agricultural Fair is the largest agribusiness event in Serbia and one of the largest of that kind in Europe. It has become the trademark of the oldest fair in Serbia – Novi Sad Fair, and Novi Sad, as a prestigious site for presentation and development of agribusiness. It gathers the most significant companies in agribusiness, agricultural production, and machinery and presents the best in cattle breeding. It is an unavoidable place for agricultural producers from the country and the region.

The International Agricultural Fair that was held at the Fair in Novi Sad for the 82nd time was home to 1.500 exhibitors presenting goods and services from 60 countries. The Fair showed the latest in agriculture, food and drink industry, agricultural mechanization, food industry equipment, chemical and protective products, organic food and other agribusiness goods and services. Italy – Friend of the 82nd International Agricultural Fair, was presented in the exhibition and congress segment. One of the largest agribusiness companies, “Al Dahra” from the United Arab Emirates, presented itself at the Fair for the first time.

“This is a good way to promote the City of Nis and it is the opportunity to be spotted by potential investors. Agricultural Fair in Novi Sad is the leading fair of agribusiness in the Western Balkans and Southeast Europe. During the seven days of the fair producers, traders, experts, politicians, farmers, media representatives and visitors from all parts of society and the agricultural sector meet and connect”, as Jovan Stojkovic Nis City Council Member said.