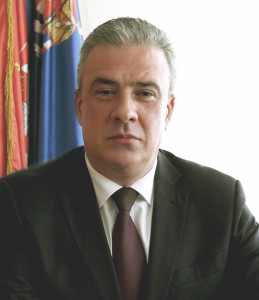 He finished elementary school and the two years of vocational education in Nis, and the third and the fourth year of high school of Medicine-Pharmacy technician Department in Leskovac.

In 1999 He graduated from the Faculty of Technology in Leskovac with the average mark of 10 at the Department of Chemical and Biochemical Engineering.

In 2012, he was attained Master’s Degree in Microbiology Sciences at the State University of Skopje “St. Cyril and Methodius”.

Rade Rajkovic has been a participant and organizer of many student events at home and abroad; as a student representative of the former Yugoslavia, he took part in the World Congress of students in Belgium. As a member of the Board of the Student Center Nis, Student Health Center and the Student Resorts of Serbia, he actively participated in their work and improved the quality of their services.

In November 2005, by the Decision of the Government of the Republic of Serbia, he was appointed Director of the Student Center Nis. For the results achieved in 2008, Student Center Nis received the National Business Excellence Award in the field of “leadership and resources” by the Fund for Quality Culture and Excellence, by the Serbian Chamber of Commerce and by the Ministry of Economy and Regional Development of the Republic of Serbia. In 2014, the Center for Economic Analysis ranked the Student Center Nis among the most successful companies in Serbia.

Within the previous work in the student institutions, as a director, he was primarily guided by students’ interests, i.e. by the interests of the service users and the employees, strictly respecting the current legal framework and regulations. He improved his professional career by participating in numerous trainings thus acquiring relevant certificates from a wide range of areas, such as education, management, environmental protection, food quality and safety, etc.

Heretofore, he received the numerous awards and recognitions, and some of the most important are:

As a participant of the war in 1999, he was assigned the Award for Bravery and the achievements in building and strengthening the combat readiness of the Yugoslav Army in the defense of the homeland against NATO aggression.

Rade Rajkovic is the Chairman of the Movement of Socialists Party – Nis City Board.

He is married and has two daughters.